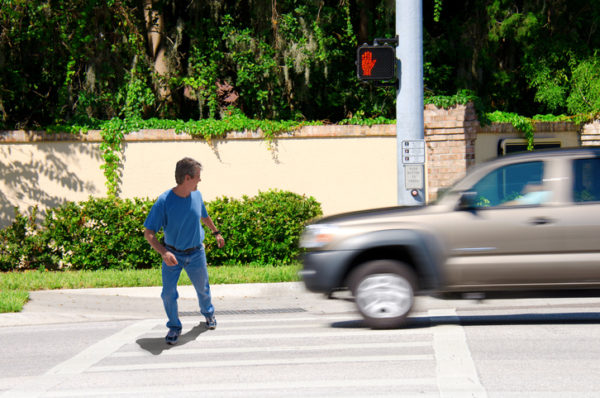 Across the U.S., the number of serious pedestrian accidents is rising, but some vehicles are more likely than others to cause serious injuries and death; and among these vehicles, some crash configurations are more deadly than others.

A new study by the Insurance Institute Highway Safety (IIHS) says that when making turns, larger vehicles like SUVs, pickups, vans, and minivans are far more likely than average-size passenger cars or sedans to hit pedestrians. The study's authors say the reason is that larger vehicles may not afford their drivers as clear a view of people crossing the road due to their added height.

Not only are larger vehicles being tied to more accidents, but they are also being linked to more severe accidents. Generally speaking, the larger the vehicle, the greater the damage it can inflict for obvious reasons.

Cicchino added that the link between larger vehicles and certain common pedestrian crashes points to another way that the increasing number of SUVs, trucks, and work vans on the road might be changing the dynamics of the (pedestrian) crash/accident trend.

In Maryland, over the last several years, the number of fatal pedestrian accidents increased from 102 to 130, according to 2020 federal data. In our immediate area in Rockville, between Hungerford Drive near Montgomery College, and the Rockville Pike at the intersection with Park Road, the number of fatal pedestrian crashes has increased. Is this all attributable to more SUVs or trucks? We don’t know for sure, but research says that there may be a connection. Of course, we also have more cars and pedestrians on the road as our population in the area increases and roads become more crowded.

IIHS says they were prompted to dig deeper into pedestrian crashes because, nationwide, deadly pedestrian accidents have increased by almost 60 percent since 2009. They considered many factors, including vehicle type, vehicle configuration, and driver action. Among their findings, researchers from the IIHS study say that:

How to Protect Yourself:

What to do if you get hit by a car, SUV, truck, or any other motor vehicle

IIHS says that driver education and improved vehicle safety equipment could prevent some crashes. General vehicle-design solutions that have already shown promise include AEB systems that can detect and avoid pedestrians or reduce impact speed, airbags, hoods that automatically pop up upon impact, and more sloped front ends.

For the most part, vehicles are becoming safer for the people on the inside, but at the same time, more dangerous to vulnerable pedestrians and cyclists. Some of the most common pedestrian accident injuries include traumatic brain injury, concussions, severe head and neck trauma, back and spinal cord damage, broken bones, and internal organ damage.

Insurance companies, of course, realize that the cost of a pedestrian accident can be high—and you can bet that they will do everything in their power to protect their own interests. That's why you need an aggressive advocate in your corner to protect your rights and fight for the compensation you're entitled to.

If you were hit by a car in Maryland, Virginia, or Washington, D.C., you need to do two things. First, get immediate medical attention to diagnose and document your injuries. Then, talk to an experienced pedestrian accident attorney about your legal rights and options.

Contact the Law Offices of Stuart L. Plotnick, LLC today for a free consultation. At no cost to you, we can explain how the law applies to your situation, give you an idea of how much your case is worth, and help you figure out the best way to help you find your way forward. Our office is located in Rockville, Maryland, and we proudly serve clients throughout Montgomery County and Maryland, Virginia, and Washington, D.C.