Study of Ages 8-13 Show Results of Injury from Football 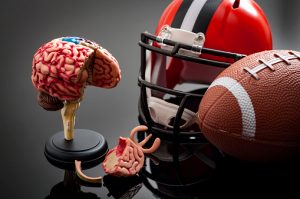 There has been a great deal of research in recent years into the long-term damage concussions can cause for professional football players, even drawing enough attention to make a movie about it , "Concussion" starring Will Smith in 2015. A notable by-product is the discovery of the condition known Chronic traumatic encephalopathy ("CTE") a neurodegenerative disease which has been found present in the examination of number former NFL players who have had multiple head injuries. It has been found in other who have participated in other contact sports on a regular basis including soccer, where making contact with the ball with one's head is routine part of the game.

Recent studies have found that concussions and other types of brain injuries resulting from contact can affect high school athletes after only a few years of participation.  However, far less attention has been paid to children striving for a place in the NFL, or for the effects of repeated hits that do not show immediate signs of concussion. The Atlantic ran an article about a study done on male football players between the ages of 8-13, and the results raise significant concerns.

With or Without Concussions

Wake Forest School of Medicine's Chief of Neuroradiology, Christopher Whitlow, decided to study the ways head impacts affect brain development. Over the course of one football season, his team used a Head Impact Telemetry System on boys playing the sport aged 8-13, in conjunction with video data from games and practices. Included in the study were elaborate brain images, called Diffusion Tensor Imaging ("DTI"), recorded before and after the season. This style of imaging is used to identify tiny changes in white matter of the brain.

The tiny changes found in the subjects focused on a state called fractional anisotropy, a measurement of how orderly and uniformly water moves through the tissue, with more erratic movement being associated with head trauma. Not only did the images taken at the end of the season show signs of this disorderly movement, but the severity of it was closely tied to the number of head impacts each subject suffered - even though the boys showed no signs or symptoms of concussions.

"These decreases in FA caught our attention, because similar changes in FA have been reported in the setting of mild traumatic brain injury," said Whitlow.

While this study was in a very small club both for focusing on youth and for identifying specific exposure, it ties in strongly to existing research. A study by Boston's Brigham and Women's Hospital found that NFL players who began playing before age 12 showed higher risk of altered brain development, and Boston University's Ann McKee argued that no child under the age of 14 should play football due to vulnerabilities that come from their body proportions. Whitlow is not going quite that far.

"We aren't out to destroy football, by any means. This is the type of work that's going to save and help football going forward." He points to the ability of national organizations like Pop Warner and USA Football to introduce oversight and make changes based on research like his, if they can begin to account for the large percentage of football played by youth across the nation that exist outside of such groups. By providing the evidence, he hopes that youth football can be made more safe for the players. In fact, many youth leagues encouraged by the POP Warner organization have no proposed stricter standards or monitors when it now comes to suspected concussions of players and even instituted sideline protocols for examination in order to determine whether a player is showing signs of such trauma and may return to play.

Signs of concussion, can include headache(s), nausea or vomiting, dizziness, blurred vision, ringing in ears, and problems with short term memory.

We also encourage football leagues to take this evidence into consideration and put proper weight on the safety of student athletes. Personal injuries do not always appear how and where we may expect them, and we need to be vigilant both to prevent injuries and hold parties accountable for the harm they cause. If you or a loved one have been injured, tell us your story so we can work to help you every step of the way.