Home / Blog / The Dangers of Road Rage and Aggressive Driving

The Dangers of Road Rage and Aggressive Driving 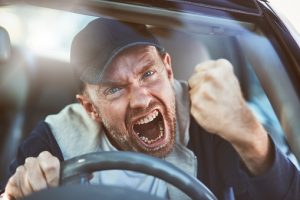 Aggressive driving leads to more aggressive driving. Road rage is real. Sometimes we witness it from another lane, and in some cases it gets so out of hand we end up seeing the carnage on the nightly news.

"We assume other drivers behave badly on purpose,'' says Dr. Christine Wickens, who studies road rage for the Institute for Mental Health Policy Research at the Centre for Addiction and Mental Health (CAMH) in Toronto. "If we attribute poor diving to deliberate, intentional meanness, we tend to be more aggressive ourselves.''

If someone bumps into you in the grocery store, she notes, "You can see that they're trying to avoid a small child, or they say 'Sorry,' or you can see a sense of regret on their face. On the road, there's no context, you don't know it was a mom who was distracted because her kids were fighting over the iPad. On the road, if somebody cuts you off, you have no idea why and we tend to jump to the conclusion that they did it on purpose.''

In Sacramento, California, last month, a road incident closed a busy road as a man allegedly rammed a vehicle multiple times. Then he allegedly jumped on the car and tore off parts of the vehicle.

In May, in New York City, a man behind the wheel of a SUV allegedly, drove directly at a man on a motorcycle. According to the New York Post, the SUV driver told the biker, "I'm going to run you over!" The police reported that the road rage had simmered for at least 40 blocks.

Road rage comes in many guises, including:

"Our vehicles are a little territorial, and there's anonymity - the idea that you and this driver will never see each other again,'' Dr. Wickens says. "If you and your neighbor get in a crash when you pull out of the driveway, will you scream at them?''

Dr. Wickens also said that her research showed that drivers who reported mild aggression - like cursing or giving someone the finger - had a higher chance of getting in a crash than drivers who didn't.

In a 2016 poll conducted by the American Automobile Association (AAA), half of the drivers who shared road rage stories admitted to engaging in aggressive behavior in response to another's driving. AAA warns drivers to avoid giving in to the temptation to seek revenge, or intimidate aggressive drivers.

AAA says there are simple ways drivers can lower their chances of encountering road rage:

AAA also advises: Don't engage. This means giving the angry driver a lot of room, avoiding eye contact, and if you need to, finding help in a populated area. Keeping calm and following these steps often discourage aggressive drivers from engaging in more dangerous behavior.

If you need help after an accident, contact the Law Offices of Stuart L. Plotnick, serving Maryland, Northern Virginia and Washington, D.C.