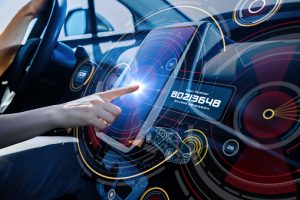 Cars, the original - and one of the great - mobile devices to begin with, are about to get even more connected to the Internet. According to Glenn Lurie of AT&T's Emerging Devices business, only five percent of the cars are connected today. "Three to five years from now, 100 percent will be connected,'' he said. "You'll see diagnostics, alerts when the airbag goes off, real-time traffic reports, entertainment in the backseat.''

While some of the technology may improve safety, according to a story in the Milwaukee Journal, Sentinel consumers are less concerned in safety features and are more interested in distracting tech gadgets. This is not good news.

Researchers at the University of Utah - commissioned by the AAA Foundation for Traffic Safety - have examined the time it took drivers to complete a task using the Infotainment System in 30 vehicles manufactured in 2017. Twenty-three of the 30 systems were considered high - or very high - demand. Drivers found using voice-based and touch screen features were distracted for more than 40 seconds when sending a text or programming navigation. Taking your eyes off the road for two seconds doubles the risk of a crash, according to AAA research. Texting was considered the second-most distracting task while behind the wheel.

The Centers for Disease Control and Prevention report that more than a thousand people are injured in crashes involving distracted driving. "We welcome the innovation and technology into the vehicle,'' a spokesman for AAA says. "But we need to pause and we need to be a little bit more thoughtful about the way we introduce these systems to motorists.''

The National Highway Traffic Safety Administration has suggested that car companies make some of the new infotainment technology only functional when the car is in park. But customers seem to want to watch the new expanding screens.

Until recently, dashboard technology hasn't factored that highly into most car buying decisions, but car manufacturers are expecting it to boom.

A recent study by market research company J.D. Power & Associates found that 15 percent of consumers ruled out buying a car if it didn't feature the latest technology. That's an increase from four percent a year ago. The auto industry says the new systems are a better alternative for drivers, than handheld devices that weren't designed to be used behind the wheel.

According to a spokesperson for the Alliance of Automobile Manufacturers, new vehicle-integration systems "are designed to be used in the driving environment and require driver attention that is comparable to tuning the radio or adjusting climate controls, which have always been considered baseline acceptable behaviors while driving.''

AAA insists drivers should use infotainment technologies "only for legitimate emergencies or urgent, driver related purposes.''

"Drivers want technology that is safe and easy to use,'' said Marshall Downey, AAA's president and CEO, "but many of the features added to infotainment systems today have resulted in overly complex and sometimes frustrating user experience for drivers.''

If injured in a traffic accident caused by a driver's inattention due to dashboard or some other entertainment or distracting activity or device, contact the Law Offices of Stuart Plotnick.