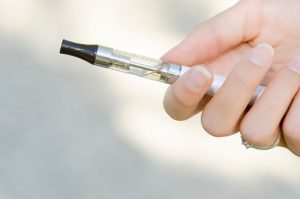 Anyone who has tried to quit smoking cigarettes knows the painful physical and emotional agony that one must endure in order to kick the habit. While many choose to quit “cold turkey,” many others opt for a nicotine replacement product. Among the myriad of nicotine replacement products, nothing has come as close to the replacement of an actual cigarette as the electronic cigarette, also known as an e-cigarette, e-vaporizer, personal vaporizer, or vape pen. “Vaping” has become the new smoke of millennials and others seeking alternatives to the old ways and risks of nicotine. But how safe is an e-cigarette?

The e-cigarette is a lithium-ion battery-operated electronic nicotine delivery system that people use to inhale an aerosol. This aerosol usually contains nicotine, as well as chemicals and can be flavored, and may bear a physical resemblance to a cigarette, pipe, or pen. There are currently over 460 different e-cigarette brands on the market and their sales are estimated to have surpassed the sale of traditional cigarettes. According to the Centers for Disease Control, the e-cigarette is the most commonly used form of tobacco among middle and high school students in the U.S.

In addition to subjecting themselves to the yet unknown long-term physical risks of inhaling the chemicals found in e-cigarettes, e-cigarette smokers are also at risk of imminent injury or death caused by exploding e-cigarettes. Yes, "exploding!!!"

Since being introduced on the U.S. the market in the early 2000s, there have been close to 200 reported e-cigarette explosions in the U.S, many of which resulted in some form of personal injury. So, what causes these explosions?

Broadly stated, the most common causes include design defects, manufacturing defects, and post-manufacturing modifications to the e-cigarette that burden the device. The first reported death in the U.S. resulting from an exploding e-cigarette occurred in May 2018, when a Florida man’s e-cigarette exploded, hurling fragments into his head and subsequently igniting a fire in his apartment. The area medical examiner’s office concluded that his death was caused by a “projectile wound to the head” initiated by the exploding e-cigarette. It was later determined that the man was using a modified e-cigarette from a company called “Smok-E Mountain Mech Works.” While the modification allows the smoker to inhale more smoke, it can also result in excessive voltage, which increases the risk of explosion.

According to the U.S. Fire Administration, most reported explosions occurred either while the device was charging or in use during vaping. Most of the reported explosions involved “box mod” e-cigarette devices, which are box-shaped devices popular for their long battery lives. In its July 2017 report titled “Electronic Cigarette Fires and Explosions in the United States 2009-2016,” the U.S. Fire Administration stated, “the shape and construction of e-cigarettes can make them more likely than other products with lithium-ion batteries to behave like ‘flaming rockets’ when a battery fails.” According to the Food and Drug Administration (“FDA”), which declared its authority to monitor e-cigarettes in 2016, it is unclear what causes some e-cigarettes to explode.

In addition to the recent death in Florida, reported injuries from exploding e-cigarettes include severe burns, fractured facial bones, broken teeth, broken neck, and paralysis. Even if an explosion does not result in serious injury or death, the explosion itself may be startling enough to cause someone to react in a dangerous way. For instance, someone who is smoking an e-cigarette or “vaping” while driving, may inadvertently cause an accident and end up injuring themselves and others.

If you or a loved one has been harmed by an e-cigarette, we invite you to set up a free consultation by clicking on this link http://www.plotnicklaw.com/free-consultation. These consultations are designed to help us establish the facts of your claim, evaluate your potential for compensation and develop the best strategy to help you. Your free consultation is also an opportunity for you to ask us any questions you may have about your legal rights and figure out if we're the right fit for you. And best of all, if you decide to hire us to represent you, you only have to pay if we win your case. That's because the Law Offices of Stuart L. Plotnick, LLC in Rockville, Maryland, works on a contingency fee basis. There are no hidden fees, no surprises.