Home / Blog / DRUNK DRIVING AND DRIVING WHILE IMPAIRED: TIS THE SEASON; BE RESPONSIBLE

DRUNK DRIVING AND DRIVING WHILE IMPAIRED: TIS THE SEASON; BE RESPONSIBLE 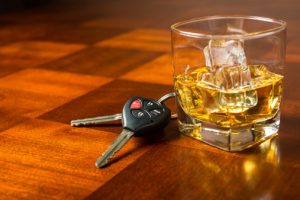 The CDC reports that every day, 28 people in the United States die in motor vehicle crashes that involve an alcohol-impaired driver. This amounts to one death every 51 minutes. That does not include those cases where the driver is impaired by drugs or some other substance. The annual cost of alcohol-related crashes totals more than $44 billion. In the State of Maryland, 6,266 impaired driving accidents resulted in 1,920 injuries and 160 deaths, based on the 2017 Maryland Impaired Driving Prevention Program Area Brief.

If you were injured in a drunk driving accident, our skilled auto accident lawyers in Rockville and Bethesda are here to assist you. Let our lawyers fight to recover the compensation you deserve for your injuries, and work to make sure that we hold drunk drivers accountable for the injury and carnage they cause due to their reckless choice to get behind the wheel. Contact us today to schedule a free, no obligation consultation to learn more.

The devastation caused by drunk drivers:

In recent studies by the Centers for Disease Control (CDC), over 10,000 people lost their lives in accidents where alcohol was a factor. This number represents almost one-third of all vehicle-related, deaths on our highways each year.

Who is most at risk?

Young people: According to the CDC

Drivers with prior alcohol driving or DWI convictions:

The effects of blood alcohol concentration (BAC) and one's ability?

Information in the table below published by the CDC shows the impacts of alcohol on the average person at various BAC levels. Keep in mind that this table is based upon the size of the average man and woman in the United States.  Impacts can vary as being more or less severe depending on a number of circumstances. 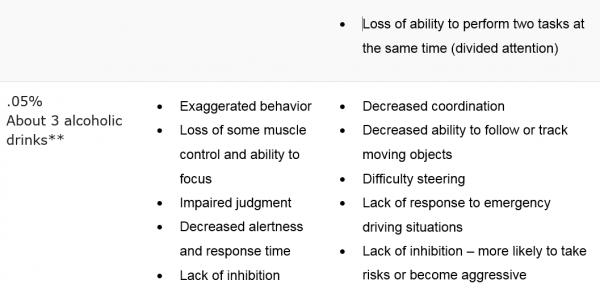 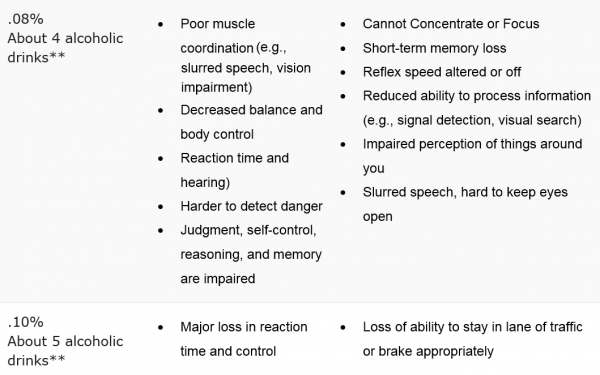 In Maryland, the District and Virginia, and the rest of the 50 states, it is illegal to drive a motor vehicle if your BAC is above certain levels, in Maryland the number is 0.08. However, as noted above, a recent study found approximately over 1 million drivers in the U.S. were arrested for driving while impaired by alcohol or drugs on a yearly basis. In the Maryland area or DMV, over 50,000 people per year are arrested for driving under the influence.

If convicted of driving while under the influence of Alcohol (DUI/DWI), criminal penalties and

license restrictions in Maryland, may include:

How to Avoid Drunk or Impaired Driving and Save Lives:

Drunk driving should be avoided at any cost. That does not mean that consuming a small glass of wine or bear with your dinner is prohibited.  Each person's tolerance is different; know your limits! The following steps or alternatives can help keep you and other motorists safe: