Home / Blog / Distracted Pedestrians Are Walking the Path to Injury

Distracted Pedestrians Are Walking the Path to Injury 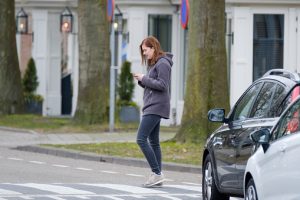 With devices becoming more mobile and multi-functional, it's a common sight to see pedestrians walking with their eyes glued to their cellphones, or distracted with their earbuds, instead of paying attention to what they are doing. Whether it be crossing the street during a red light, heading towards that crack in the sidewalk, or strolling behind that car getting ready to back out of a parking space, the path might lead to an injury. While a lot of scrutiny is placed on distracted driving, pedestrians should be equally as responsible for paying attention to what's going on in front of and around them. We all have a duty to protect ourselves from peril.

It's fairly common to see a person walking down the street while typing out a text message or fiddling with their music. This has become far too common of a habit for pedestrians, and as a result, many have landed themselves in the hospital. In 2010, the Center for Disease Control noted that over 2,500 pedestrians were taken to emergency rooms in the United States from injuries related to a cellphone while they were walking, according to a study published in the Accident Analysis and Prevention Journal. The number of pedestrian accidents attributed to cellphones and distraction has likely doubled in 2013, since the original survey was conducted, says lead researcher James Kubick. This number is likely higher since not all the incidents are reported. Pedestrians ages 16 to 25 are the most at risk of experiencing an accident due to distracted walking.

A recent Australian study showed that people distracted by cellphones weren't able to walk in a straight line while reading or texting. This distraction also caused test subjects to walk slower, unevenly, with rigid posture and poor balance.

The story of a woman who fell into a bay because she was checking Facebook went worldwide. She walked off a pier in Melbourne and unfortunately, she didn't know how to swim. She called for help and nearby police saved her. She was taken to a hospital to be treated for her injuries.

Another man was so distracted talking  on his cellphone that he didn't realize that he was walking onto the train tracks in Philadelphia. He was lucky there were no trains approaching, but it took him a while to recover from the fall off the platform and to pull himself out.

Unfortunately, a New York City woman died after she fell in a gap between two subway cars. She was crushed by the train's wheels and was dragged for two stops. Video footage shows the woman's head was down and authorities believe she was distracted by her cellphone, according to News Sources.

A Seattle woman was killed after being hit by a truck while she was chatting on the phone with a friend. She was on the way home after dinner and she had ignored the sound of honking in the background as she walked into the road. And right here in Maryland, we had a young high school student crossing the street on his way to school. A major contributing factor was that the victim was playing a game on his cell phone at the time of impact.

We also had the case of a driver who ran right into the side of a police car while following the map on his cellphone during a session of Pokémon Go.

In a review of pedestrian fatalities in 2010, the Office of the Chief in Orlando, Florida found that 20 percent of the pedestrians involved were distracted by cellphones, MP3 players, mobile devices, pushing a shopping cart, walking a dog, or riding a skateboard. While it's not illegal to cross the street distracted, many police agencies have launched awareness programs, including radio and TV campaigns to get the word out and ensure that pedestrians pay attention when they're crossing intersections.

If there's a green light that gives vehicles the right of way, it's important that drivers continue to watch out and yield for pedestrians who might not be paying attention. Vehicle drivers should make sure that pedestrians make eye contact before walking. Otherwise, they should honk to get their attention.

Pedestrians must stay alert and keep their heads up, especially when crossing the roads. If they are listening to music, or talking over the phone on their Bluetooth device, it's important that the volume isn't turned up so loud that they can't hear what's going on around them.