Home / Blog / How well do guard rails protect drivers in the event of a car accident?

How well do guard rails protect drivers in the event of a car accident? 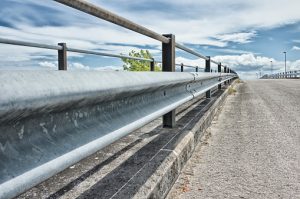 Guard rails act as a safety barrier to prevent drivers from serious harm in lane departure crashes. In some cases, they may not be necessary — such as when a driver can safely exit the road in an open area without the risk of a collision.

Guard rails are often found on or for bridges, used as barriers separating traffic, and areas where drivers would be at risk of rolling over or going off the road, a sharp curve, if they were to lose control. They're built to stop cars that have exited the roadway or slow them down enough to prevent a crash from becoming an even greater catastrophe.

Drivers often make contact with guardrails for the following reasons:

Can guardrails put lives in danger?

The size and speed of a vehicle is often a factor when drivers plow through or into guardrails. Some guardrails, however, are defective or poorly made. The culprit, in this case, would be the guardrail manufacturer.  In these cases, a guard rail can act as a “sword” that penetrates or pierces the body or passenger compartment of the car and causes greater injury and damage.

There have been several lawsuits against manufacturing companies, such as one based out of Omaha, Nebraska, whose design flaws caused one person's death and another's permanent injury. By design, guardrails are supposed to telescope or slide into each other when struck by a vehicle. The X-LITE guardrails, manufactured by Lindsay Corporation, failed to do so, according to the Insurance Journal

In one crash, which happened in South Carolina in 2017, components of the guardrail pierced through the vehicle and resulted in the life-threatening injuries of a woman sitting in the passenger seat. She later succumbed to those injuries.

Months later, a driver in Tennessee made contact with guardrails manufactured by the same company. The beam pierced through her vehicle and caused an injury so severe, she had to have her left leg amputated.

"Should there be any testing done that suggests these guardrails are unsafe to be used on South Carolina roads, the governor would ask that the department develop and present a proposal to him and the General Assembly for removing them in the most efficient and cost effective way possible,” said Brain Symmes, a spokesman for Governor Henry McMaster.

Officials in California also began replacing the Lindsay X-LITE guardrails across the state after the death of a driver in San Diego County, according to NBC San Diego.

In this case, the driver lost control of his car and crashed into an X-LITE end terminal. Similar to the incidents in South Carolina and Tennessee, the guardrail failed to telescope and pierced through the vehicle.

What are my legal options if a defective guardrail was a factor in my crash?

If you were hurt in a crash or lost a loved one because a guardrail failed to perform as it was intended to, the best thing you can do is speak to an experienced Maryland or local car accident attorney as soon as possible. Your attorney can launch a thorough investigation and gather details from the police report. Transportation and engineering experts will be needed. Moreover, your attorney can identify the responsible parties in your crash, which may include:

The legal team at the Law Offices of Stuart L. Plotnick, LLC — based in Rockville, MD — can help you pursue a strong car accident claim or wrongful death lawsuit. To learn more, contact us online or call us at 301-251-1286.