Home / Blog / Drivers have a duty to prevent "doorings"

Drivers have a duty to prevent "doorings" 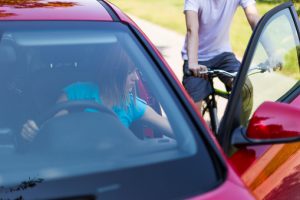 An increasing number of residents in the greater D.C. area prefer to reap the economic and health benefits of getting around by bicycle instead of sitting in a car. Many bicyclists comply with the rules of the road and ride defensively but a common danger bicyclists face is the actions of drivers and passengers exiting parked cars.

Opening a car door without looking is an often-overlooked risk to bicyclists. This usually happens without warning — giving bicyclists almost no time to react. There are two ways bicyclists can be injured or killed in what are known as "doorings" — colliding with an open car door or swerving into traffic to avoid hitting a car door.

One particular incident involving a 30-year-old art teacher in Brooklyn, New York recently made national headlines. The driver of a parked van opened his van door in the direct path the woman was riding. As she swerved to avoid hitting the door, she was struck and killed by a truck.

Tragedies such as this can be prevented simply by practicing awareness before exiting a car. To do so, drivers and passengers should look no further than a method originated in the Netherlands, according to Venture Beat. It's called the "Dutch Reach."

This practice requires vehicle occupants to open the nearest car door with their far hand. This naturally allows vehicle occupants to swivel into a position that makes the rear-view mirror and back of the vehicle more visible. As a result, drivers and passengers may more easily spot oncoming bicyclists. Of course, no matter what you do, always look in the side-view mirror on the door at the side of the car you are exiting.

This method has already been implemented into the United Kingdom Department of Transport's road-user rulebook. Now, it's being taught in some driver education courses throughout the United States.

Ride-share giants Uber and Lyft are now considering the risks doorings pose to bicyclists. Uber plans to educate riders on how to prevent doorings through a safety campaign. In addition, Uber will include alerts to notify users of any bike lanes along or near their drop-off point by using publicly available maps.

Currently, Uber riders can get notifications in Washington D.C., as well as New York and San Francisco.

Lyft plans to encourage its users to use the Dutch Reach when entering or exiting a car through smartphone app reminders. In addition, Lyft now distributes decals reminding users to watch out for bicyclists and scooter riders. The decals will be strategically placed on the windows of Lyft cars.

If you were injured in a bicycle accident due to the negligent actions of a driver or passenger, consult with an experienced attorney at the Law Offices of Stuart L. Plotnick, LLC. Our legal team will work with you every step of the way to help you devise a winning legal strategy and maximize your compensation.

To get started, contact us online and set up your free consultation today.